We carry out instrumental exploration of ammunition, bombs and make sure they are disposed of accordingly.

We have an outstandingly high professional knowledge and significant experience in the field of EOD. In our company we use the most modern German instruments and systems and, to which we have assigned our a precise, complex, rapidly developing GIS systems and our own developed, safe, professional, verifiable technologies.
This special segment of the rapidly developing military industry is continuously monitored by our company. We study the development of EOD from theoretical, technical, practical aspects in Hungary and abroad, test and apply it into our technology.

Discharge of explosives, ammunition from the grounds and special areas with professional terminology is called „area release”.

Areas for shooting ranges, artillery and bombing areas, tank-fire practice areas, and shooting ranges are the areas under the area releasing activities.

We often do our spatial EOD activities in highly protected nature conservation areas, under limited circumstances (without disturbing the bird’s hatchings and migrations, or the habitats for certain animals and plants). 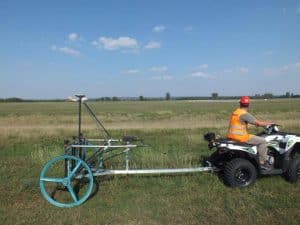 Our soil testing activities are used by our customers prior to the commencement of archaeological activities, preparation of expert opinions and construction activities. Soil testing is carried out throughout the country to the depths of our customers' technical requirements by our professional staff.

Instrumental soil testing is also required for the search of line-based utilities containing ferromagnetic material in the soil, as well as for the search for lost drill heads and sunken drill pipes.

We also have a great practice in finding buried metal barrels. 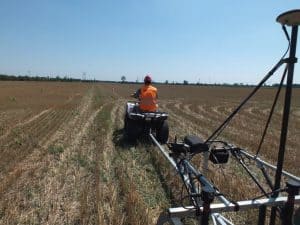 In-ground instrumental exploration and explosive objects disposal (EOD) at various depths, taking into account the technical needs of the customer and the features and military history of the area. We make an EOD impact study, impact assessment, technical documentation, and provide full counseling.

Our company has completed its tasks so far:

EOD OF A SHOOTING RANGE

Next to Győr, an ex-Soviet practice area was cleared by our team.

IN BUILDINGS AND INSTALLATIONS